In December 2008, I met a small sickly kitten who would become my constant companion and my unfailing friend during the time when my mother died from cancer.

Mom lived with my sister Julie, and Julie never met a cat she didn’t like (it runs in the family). Julie had adopted a couple of kittens from a litter of barn cats. Sierra looks like a purebred Siamese. Chevy looked like a weedy little scrap of a thing. I met them at Christmas 2008. Mom’s last Christmas.

I was in Indiana for most of 2009, spending time with Mom (who was going downhill in stops and starts) and helping Julie, who was working full time and has two kids. Chevy quickly adopted me as the human who was most likely to save her from the various dangers in her new life. Mostly the kids, because they were too young to tell the difference between toys and live animals.

It became clear that Chevy was going back to Texas with me, an arrangement that suited all of us. She’d be better off in a quieter home. And in 2009, she had health problems — mostly asthma at that point — that could be fixed. I could help Chevy feel better, when none of us could really do anything to help Mom.

[In addition to a new home and new friends, Chevy got a new name when she came to Texas. My husband David started calling her Squib. A squib is a small firecracker, and that suited her far better than her original name.]

Squib was scrappy and smart and reckless. She was the top cat, even though our other four cats were much larger — she had cat voodoo. She loved road trips. She slept on my pillow and was always with me when I needed another soul to touch, especially when Mom died. Her ideal weight, according to our fabulous vet, was 7 pounds. She never got there. My friend Jenny refers to her as a perma-kitten. 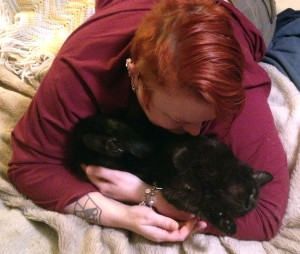 Squib had a number of health problems, most significantly an immune-system condition that gave her horrific gum disease (we were able to fix that) and a congenital heart condition (not fixable). She was the Kardiac Kitten. She survived a number of health crises, but we finally had to let her go in February 2014.

I’d had four years with the most important cat ever.

I’ve lost friends and family and other animal companions. Losing Squib has been like losing Mom, and I’m massively frustrated because I don’t know how to explain it to people. I can write. [Looky here, I’m writing.] But “my cat died” either gets blank looks (from folks who aren’t into animals) or condolences (from people who do share their lives with animals, and understand what losing a companion is like).

I don’t have words for the difference between losing other cats that I loved a lot, and losing Squib. It’s vastly larger and harder, even more than most humans I’ve lost, no insult intended to the people.

Worse, no one realizes that they don’t understand what I mean. “My cat died” seems pretty straightforward, and there really aren’t a whole lot of other ways to say it.

After Squib died, I made a scrapbook. It’s way bigger than she was, and it’s got pictures and poetry and yes, beadwork, all in the attempt to capture what was special about my cat, and why I was so devastated. The scrapbook does that, but I found that I hadn’t gotten the need to express my loss out of my system.

So 2014 has become my year of the cat, as far as jewelry making is concerned. I’ll be starting a gallery of the pieces I’ve already done (and eventually, even stuff that’s not related to cats at all).

Right now, I’m working on the largest piece of beadwork I’ve ever tackled, called A Feline Masterpiece. The title quotes Leonardo da Vinci, who said “Even the smallest feline is a masterpiece.” Well, she was.

It’s been slow going. I don’t have a lot of great pictures of Squib because we just didn’t expect her to die so soon. The picture I wanted to use needed a lot of love and attention in Photoshop, which my husband David generously provided. Converting the pattern to a beadwork design involved a program called Bead Creator Pro, which is by no means “plug and play” – I spent about 40 hours tweaking the pattern into something that captured Squib’s expression and personality. (I’ll write up what I’ve learned about making the best pattern possible, at least with BCP, in a later post.) 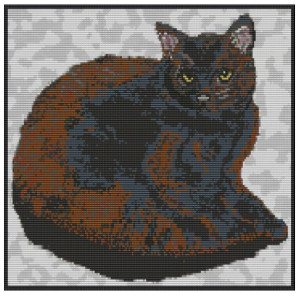 In addition to designing a pattern I liked, I had to figure out ways to handle such a large piece. The finished picture will be about 9″ by 9″, and is built out of 23,940 beads.

There’s remarkably little advice out there for bead weavers who want to make large tapestries. I’m making it up as I go, somewhat desperately. I knock containers of beads off my table and I can’t keep track of the number of warp threads I’ve added, and we have kittens who don’t understand about staying off the desk, and… well, you get the idea. I can’t just whip out a few vials of Delicas and get to it.

I’m hoping that what I try will be useful to other beaders, both those doing loomwork and those looking for ideas about how to “organize their process.” It’s under so much construction that my readers should be wearing hard hats.

If I’m really lucky, the experts will leave comments that will help all of us.

I began weaving on 13 June 2014. You can track my progress in the upper right hand corner of this page, and I’m posting photos here on the blog.

As of this post, I’ve finished about 20% of the work. It’s going to be a couple of days before I can dive back into it – I changed one of my background colors and ran out of beads. Argh. Waiting for beads. Again. [I suppose I can start the edging on the left side….] 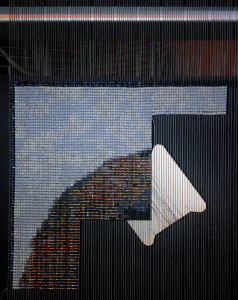 My hope is that the emotional significance I can’t put into words will be communicated, or at least implied, by the time and effort it takes to weave this picture. I will always have feline companions. But there will never be another Squib, because the unique combination of circumstances and personality and time spent together can’t ever happen again.

If you’ve made it all the way through this absurdly long post, I’m very very grateful for your attention, and I hope that as I add bead-related content to this blog it will be useful for you.

Eye of Ra framed and stable

A breath of ancient Egypt now